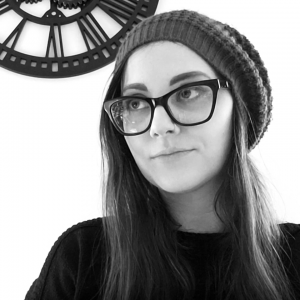 Deina has always had a passion for fantasy and science fiction. She first experienced these brand new, diverse worlds when she began reading a collection of fairy tales she received as a gift from her grandmother.

As she grew older, she sought out other fantastic worlds in the form of video games, comics, and movies. In other words, storytelling was a natural component of every hobby she enjoyed! So it was of no surprise to any of her family or friends that she began to tell her own stories: She scribbled down story ideas in her notebooks during class, posted short stories in online journals and blogs, and wrote four novellas before she graduated high school–by waking up early on Sunday mornings, stealing the family computer, and tying up the phone for hours on end (this was in the days of dial-up modems!).

Deina pulled her inspiration from sources all around her. She is strongly influenced by classic authors such as Edgar Allen Poe, Oscar Wilde, J.R.R. Tolkien, H.P. Lovecraft, Sylvia Plath, and Shirley Jackson; contemporary authors Anne Rice, Margaret Atwood, Steven King, Neil Gaiman, and Christie Golden; screenplay writers Hayao Miyazaki, Christopher Nolan, Quentin Tarantino, the Wachowski siblings, the Coen brothers, Mindy Kaling, and Tina Fey; video games Final Fantasy, Parasite Eve, Xenogears, The Legend of Zelda, the Mario universe, the MYST series, World of Warcraft, and Diablo; and all kinds of fantastic anime and television series, music, and films–far too many to include in such a brief list!

While she’s been known to dabble in multiple genres, Deina chooses to focus on science fiction and fantasy and their subgenres. Steampunk, cyberpunk, horror, and urban fantasy are a few of her favorites to explore.

Deina works as a nurse. She is a lifelong learner and is currently working on her master’s of science in nursing. When she’s not working at the clinic, hospital, or at home, her hobbies include reading, drawing, and playing World of Warcraft. She lives with her husband, two sons, and three sweet kitties. You can find her work on Amazon.

Connect with Deina on social media: