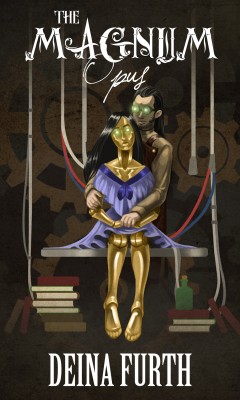 A must-read for fans of the steampunk genre, this dark novelette is a look at how love can quickly become tainted by madness. Brooding, melancholy, and a little twisted, the story delves into the curious life of Rastigan, an eccentric engineer who desires companionship more than anything in the world. But Rastigan doesn't seek connection with human beings--rather, he creates mechanical dolls to fulfill his need for interaction. When he finally builds his greatest creation to date, he thinks he's filled the gaping hole in his life. Truly enamored of his doll, he gives her the name Evangeline and eagerly instructs her on how to be his perfect mate.

But Rastigan discovers Evangeline has other plans... and he doesn't like that one bit. He'll do anything to keep her under his thumb and in his sights, even if it means keeping her under lock and key... forever.

An eccentric Victorian engineer… Creating the perfect companion is Rastigan’s dream–maybe even his obsession. For years, he has tinkered and planned, pouring his heart into his work as intensely as he poured scotch into his glass. But every machine that he built fell short of his expectations. His work completely consumed his thoughts and time, leaving him a homebound hermit with nary a connection to the outside world. As the years pressed on, Rastigan seemed doomed to live out remainder of his life as a solitary eccentric who found companionship only with his favorite brand of booze. …and his beloved robotic doll. Then he created Evangeline. She far surpasses anything he’s ever built in terms of complexity, intelligence, and of course, beauty. She’s his most lifelike invention to date, and to him, she is perfect in every way. Until she begins to develop her own desires, that is–desires that leave Rastigan out of the picture, frustrated and unconnected yet again. Has Rastigan finally found the companion he’s yearned for, or has his obsession with building his magnum opus gone too far? This dark steampunk story has a little something for everybody! Or at least something for those who relish twisted love stories, clockwork worlds, shifty characters, or who simply have a thing for Victorian oddities…

Look Inside
Disclosure of Material Connection: Some of the links in the page above are "affiliate links." This means if you click on the link and purchase the item, I will receive an affiliate commission. I am disclosing this in accordance with the Federal Trade Commission's 16 CFR, Part 255: "Guides Concerning the Use of Endorsements and Testimonials in Advertising."