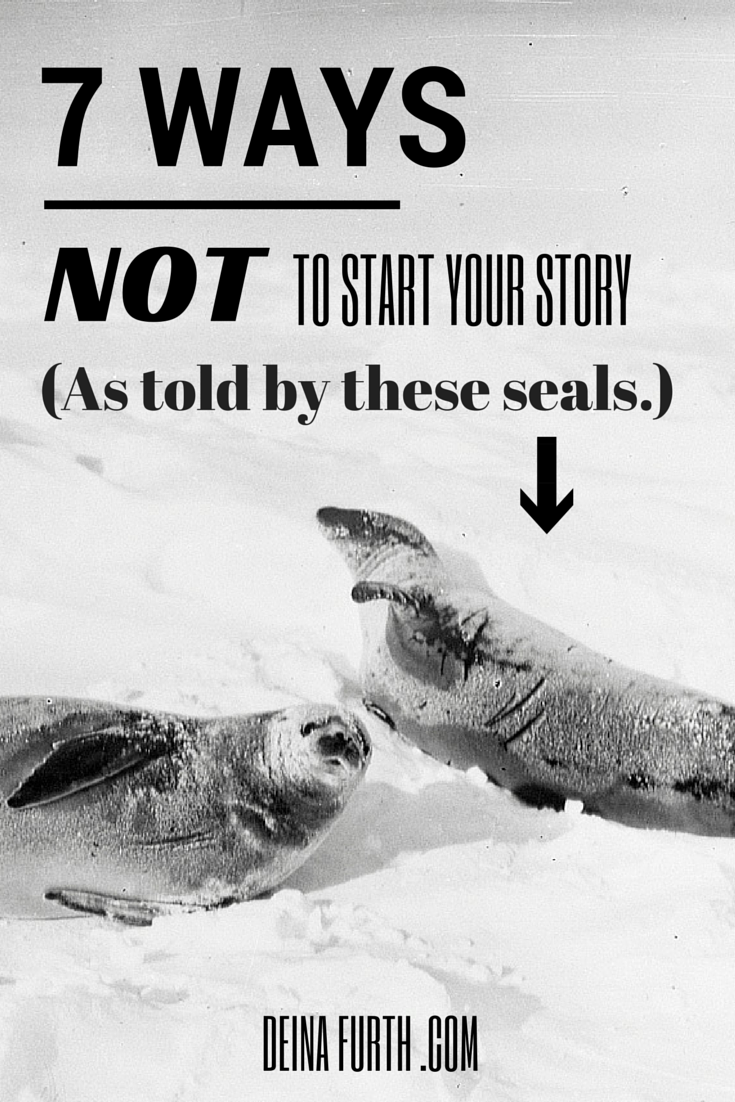 Disclaimer: I know there are always exceptions to these rules. You don’t have to let me know that it’s been done successfully before–I know it has. But I also know that the majority of us can’t pull this off; that people are tired of these cliches, and even if you do something brilliant with your story, your reader might not make it that far because he or she has long since moved on to a different book. That being said, hopefully you find these helpful, if not the tiniest bit amusing.

1. Character waking up from a dream or otherwise not knowing where he or she is.

This is a sure-fire way to get most judges rolling their eyes right off the bat. Even if you’re not submitting your work for a contest, you’re still going to make most readers groan. At best, this seems dull and unimaginative; at worst, it seems like a complete cop-out. It’s your job as a writer to bring us into your world and make us feel enticed and welcomed. No one feels enticed by seeing your character bolt upright in bed and think about how strange that dream was.

If dreams are an important part of your character’s identity (such as a clairvoyant, someone who has visions, or is trying to recall something they’ve forgotten in the past), there are other ways of going about it. Try having your character doing something exciting–perhaps seeing a real-life sign that the visions are coming true. Perhaps the character is trying to sell their services a psychic to make a little money on the side. Or maybe he or she is trying everything possible to stop the dreams from coming, and is going crazy in doing so. All of these things are so much more exciting than someone waking up and describing a dream.

If dreams aren’t an important part of your character’s identity, then think of something different altogether. There’s no reason to do this unless you want to appear lazy.

2. Character giving a thorough description of his or her physical appearance in the mirror.

I think most of us have been guilty of this at some point in our writing careers. We didn’t know how to describe our character without just listing attributes, so instead, we had the character describe them to us by looking into the mirror and listing off things we needed to know. Then, we probably watched our character sit down and eat breakfast with the family, or brush their teeth or start walking to school…

No, the ins and outs of daily life just aren’t interesting enough. We don’t need someone to list things to us and to describe things we probably already do everyday anyway. We want excitement! We want to be sucked into a world full of adventure or intrigue.

Scrap the home scene altogether. Have your character doing something active–playing sports, running from an enemy, trying to find the last copy of her favorite book in the library despite being told repeatedly by her mother that she is not allowed to read it. As your character moves and interacts with others, you can pepper in descriptions of appearance. This is 1) much more exciting to read, and 2) a great way to introduce your character without simply listing off attributes.

3. Character introducing him or herself and giving an inventory of their life.

“My name’s Eric, and I’m fourteen years old. I go to Weatherby High, and today, I just found out that I can breathe fire.”

K. While that’s definitely an interesting idea (a kid who breathes fire? whoaaah), telling us everything as if we’re in a formal meet-and-greet is… boring. Usually, this is followed up by some exposition about Eric’s family and how he just can’t seem to do anything right in his father’s eyes; how Derek, the jerk at school, picks on him all the time; and how he’s really unlucky with girls, but maybe all that’s about to change now that he suddenly has the weapon of fire-breath.

All that might be true. And it’s not wrong to include it in the story. It’s just boring to spell it all out up front like that. This kind of information should be found out naturally throughout the story, not shoved in our faces in a wall of text. So space that info out. Let us find out through actions and events, not Eric’s droning internal monologue.

All I wanted was to make toast. Instead, I nearly burned the kitchen down. When I had those two slices of wheaty goodness in the palms of my hands, I was already imagining how great they’d taste with creamy peanut butter slathered all over them. Then it just… happened: Flames shot out of my mouth, like I was a dragon or something. The toaster caught, and the fire quickly spread to the paper towels. Soon, the basket of fruit that my mom places on the counter yet never wants anyone to eat went up in flames. If my sister hadn’t run in with the fire extinguisher at that point, I probably would have just stood there like a derp while the whole place lit up.

You get the idea.

“It was a dark and stormy night.” We all know it. But that doesn’t mean that it belongs in contemporary fiction. Rather than taking a luxurious bath scented with purple prose, you should probably focus on setting the scene through the character’s actions and feelings. The weather is bad. Does that mean the character is scared? Nervous? Chasing a storm? If you feel the need to channel Mr. Bulwer-Lytton’s words, stop and think again.

So you want your scene to be opening in the rain. That’s fine–thee’s nothing wrong with describing the weather or the character’s surroundings. That’s actually vital information that we want to see. However, we don’t want a run-down of the weather report. So start with something exciting happening. Let’s say your character has a job interview today and everything depends on it: She needs to land this job to feed her kids. She might get evicted otherwise. And as she’s traveling, her car breaks down. She tries to take a bus, but it starts raining while she’s waiting. She finally arrives, a complete mess, and the thunder and rain just seem to mock her misery, reminding her that even if she does muddle her way through the interview, she still has to go back out there to get her car to a mechanic and somehow manage to pick her two children up from school.

5. Infodumping about this wonderful science fiction or fantasy world and giving us a full run-down of every custom ever.

This does happen in all genres, of course, but it is especially prevalent in science fiction and fantasy. We’ve spent all this time creating a beautiful, rich world full of different creatures, languages, cultures, and geography. We’ve written about political systems and how the people got to where they are today. It’s an impressive amount of work that you’ve done, and you want to show it off. You also need to give your audience all the necessary information so they can understand your complex storyline, right?

No, not really. In fact, read my post about the share-a-mony (aka infodumping) to get a feel for how effective I think this is.

We will get to know your world, promise. You can throw us into the prairie you so meticulously mapped out by having a fire tear through the grass and force your main characters to flee. You can set sail on the choppy waters of the great vast ocean and let us find out there’s an armed stowaway on board. You can have a character cast a spell that goes so wrong, he teleports into your very well-designed volcano. Think of ways to use your world’s uniqueness to propel your character’s story forward, not as a way to force your readers to learn every mountain and custom and inside reference before she even gets into the meat of the story.

That he was about to embark on a fantastic adventure?!

Yeah, probably not, as that is the kind of thing that happens in stories. If the character knew what was going to happen, we’d probably have a completely different story to tell about psychics, wouldn’t we?

If you use this statement in the middle of the book, you risk ruining all the suspense you’ve built up:

“Little did she know that her ex was waiting around the corner with a gun.”

When opening your story, if you’re tempted to write “little did he know”, think critically about it for a moment: What could you say in place of that? Could you do a scene switch and start from a different point of view?

Let’s say your main character has unwittingly triggered government drones by finding a secret cave. You want to say,

“Little did Brett know, he’d gained the attention of military drones that evening when he stepped inside the cave.”

“The bunker opened and the drones took off, rising into the darkening sky like a pair of silent hawks. They took an immediate course toward the mountains, where they would close in on their target, dispatching it without extravagance. It was only a short ten-minute flight, and the unmanned aircraft had already begun contacting the Pentagon to relay the mission.

Brett got the strangest feeling as he turned the keypad over in his palms. It looked ancient, like no one had used it in centuries, but something told him he was wrong to take it.”

Etc., etc. You tell me which one sounds more exciting!

There’s a boundary the author puts up when writing fiction. You, as the reader, get to peek into a world you’ve never been to. You get to know characters you’ll never meet. And whether the character is narrating to you directly or you have a narrator telling you what’s going on, the illusion of the world must stay intact.

And nothing ruins that illusion faster than the author bringing everything to a screeching halt to address you, the reader.  “What would happen if you combined a dash of sexy with a whole lot of werewolf?” you ask, thinking yourself quite clever.”Dear reader, please ensure you’re buckled into your seat because this mystery is about to make your butt fly right to the edge of it,” you say, trying to be cheeky but effectively killing the buzz before it even gets started.

Jane Austen got away with this. But she’s Jane Austen. You probably should stick to telling a story.

You want to start off with something that’s a little cheeky and attention-grabbing? Don’t start by addressing the reader. Instead, maybe your character has a thought that’s a bit self-deprecating yet still light-hearted and funny. Your narrator could take an omniscient view of things and start talking crap about the characters–as if the narrator is a character that the main cast doesn’t even know about! Some people really enjoy this kind of humor and it gives a similar effect without breaking the illusion you’ve worked so hard to create.

Honestly, there are so many things you can do to avoid this. Go with literally any of the other suggestions I’ve given.

And there you have it.

Now you know 7 horrible ways to start a story that you should avoid at all costs. But did the seal ever figure out the solution to his problem? Let’s find out.