About Sled Dogs (Buy it here!)

When Alia’s heads to southern Alaska to join her father for her summer break, she expects to spend some quality time with him and his rowdy sled dog team. But Alia’s vacation turns into a nightmare when the entire dog sled team escapes the kennel–and they’re hungry. It isn’t until the bloody dogs return that Alia discovers something is wrong… very wrong.

Sled Dogs is a gory romp through the wet, southern Alaskan wilderness, and it’s a delicious horror story you can read in one sitting.

Below is my short story based on Sled Dogs. You’ll find links to connect with Kendall at the bottom of the post. I’ve based the story on the main character, Alia, and kept the general horror feel for the story–but because I don’t want to give away any spoilers, I didn’t base it off any specific point in the book. Alright, without further ado… here it is!

That feeling of being watched.

Alia tightly clutched the handle of the pail filled with stale, vaguely meaty-smelling dog food, her knuckles quickly turning white as her heart began to beat faster. Her hair pricked up, sending shivers across her skin.

It was the second time today she’d been sent to feed the dogs. And it wasn’t exactly an easy task—she had to get into her wellies to trudge through a quarter mile of shredded clumps of dirt and grass that had mixed with the recent rain. Southern Alaska was a beautiful place, to be certain, but the rain really made it a hassle to get around the property. Plus, have you ever had to feed sixteen hungry dogs close to your own size? If you haven’t, you wouldn’t understand. And she didn’t even want to think about the mosquitoes that would start swarming the place after the rain and wind died down.

Alia moved one wet hand to wipe the strands of brunette hair away from her face, squinting to get a better view. She saw a mirrored reflection of the pines and the sky in the muck that danced as the rain pounded the ground. She saw the mists in the forest, the cabin off in the distance. But there was nothing else there, and she knew she was probably just being paranoid after listening to one too many of her dad’s bear stories. Dads. They always try to scare you—even when you’re seventeen, not five.

Alia pushed her fears aside and slogged forward, nearly losing a wellie as the muck tried to suck it from her foot. As she approached the kennel, she could hear the dogs rustling. They must have been dozing off during the rain shower. She’d have to go inside the kennel to feed them so that their kibbles didn’t get all soggy. They wouldn’t eat if their kibbles got soggy; the picky, spoiled things they were.

As she reached forward to unlatch the gate, she heard a guttural growl come from somewhere nearby. Instinctively, Alia pulled her hand away and jumped backwards, her eyes scanning her surroundings.

I knew I was being watched.

Alia turned in a circle, holding the pail fast to her chest as if it were a weapon—what, am I going to distract a bear by trying to offer it kibbles?—and keeping a close eye on the bushes that lay low to the ground. If they rustled, she was running—soggy dog food be damned.

But again, there was nothing. And all she could hear now was the rain.

Alia shook her head, trying to clear away her paranoia. She wasn’t going to let her dad’s stupid stories get the best of her. In fact, she was going to do him one better. She was going to tell him that she really did meet a bear out here today, and that she had to use her instincts to outsmart it, and—

When Alia came full circle back to the kennel, she stared into the giant, furry face of one of the dogs. She recognized him as Chicago. Her dad had named all the dogs after major cities.

“H-hi, Chicago,” Alia said cautiously. She still held the pail to her chest, unsure of whether she should reach out to the dog. Was it Chicago she had heard growling only a moment earlier? “How are you, puppy? Are you hungry?”

He must just be sleepy.

“Aww, okay, I’ll give you your dinner,” Alia said cheerfully, reaching over and flipping the latch up. “You just have to remember to share with your–”

Chicago leaped forward with such force, she felt like all the air had been knocked from her body. She fell backwards, landing hard in the mud with a grunt, the kibbles spilling out, sticking to the mud, and some even rolling into her mouth. They tasted like stale hamburger-flavored crackers.

The pail was still in her fist, which came in handy as Chicago sank his teeth into her thigh.

“Ow! Chicago, I’m not KIBBLES!” Alia screamed, and swung the pail at the ravenous dog. It bounced off his skull with a plunk, but it was enough to startle him. Alia scrambled to her feet, holding the pail between them like a shield.

“Chicago…” she said, her voice sounding stern, but unmistakably frightened. She stared him in the eyes. Something was different.

It was… it was as if he’d tasted blood, and now he wanted more. But he was just a sweet husky. Surely, it was just a mistake that he bit her.

“Chicago, stay.” Alia held her other hand out in the sign for “stay”, just as her dad had taught her.

But Chicago answered by baring his teeth again. Only now they were smeared with red, and as the fur on his neck began to stand up, forming a mane like she’d only ever seen on wild wolves, Alia wondered why her dad didn’t tell her how to deal with rabid dogs.

Do you play dead? Do you run? Wait, what am I talking about? I can’t outrun a sled dog!

As Alia wracked her brain for any dad advice she could actually use, several other growls came from the kennel. Then, as if she were in a horror movie, she watched as angry brown and blue eyes came out of the darkness.

One dog. Then two. Three. Four…

There are sixteen of those things. I have to distract them and run.

Alia peered into the pail. There were still kibbles left. If she threw it between the dogs and herself, maybe they’d rush to see what was in there. Maybe they’d start eating the food.

The dogs were circling around Chicago now. She had to do it before she became dog food.

With a grunt, Alia threw the pail as hard as she could. The dogs stopped, bodies rigid, eyes following the trajectory of the pail. It landed in the mud with a splat.

It worked. The whole team rushed as a pack over to the pail and began ravenously gobbling up the kibbles. Alia turned to run.

But standing in the same spot for so long, she’d sunk too far into the mud to take the wellies with her. As quickly as she could, she yanked her feet from the boots and took off running, her socks being of no use as the cold mud squished between her toes. Muck splattered everywhere. Rain pounded against her skin. Her breath came out ragged, leaving behind little clouds that disappeared in the mist.

Faster, faster! she told herself as she watched the tiny cabin in the distance slowly grow larger.

Then she heard the howling.

But not only that.

The howling was followed by what sounded like a hundred feet plowing through the mud, and these things were bred to run.

Keep pushing! Put that mile run that you always have to do on Fridays in Phys Ed into play!

The paws kept pounding the ground. The howls became louder. She could hear the panting, almost feel their breath on her heels.

The house was so close now, just thirty yards or so. Never had she pushed her body so hard. Her lungs felt like they were about to explode, her thighs struggling to propel her weight much longer.

A face appeared at the window.

The face disappeared, and Alia knew her dad was coming. She was going to be okay.

She could hear the panting so close behind her now. She didn’t dare stop and see how close those things were. The house was a mere fifteen yards.

Something grabbed at her jacket but didn’t quite manage to get a hold of it. Alia screamed and wrapped it tightly to her body, granting herself an extra four inches of room between her and the hungry set of jaws behind her.

The first bullet whizzed by her head. She heard a sickening yelp and a squishing sound. The after-shot echoed throughout the trees like thunder.

Alia closed in on the house, seeing her dad crouching behind some of their porch furniture, shotgun raised. He fired again, and she heard another yelp, followed by growling and the tearing of flesh.

Grabbing a hold of the handrail, she used her arms to help her move her jelly-legs up the stairs. Her father fired once more—evidently missing this time, since there was no yelp—then rushed to the door and opened it for her. They both barreled inside, and he slammed it shut just in time to hear the loud thumps of the furry bodies colliding with the door.

Alia fell onto the floor, clutching her burning chest.

“Are you okay, Alia?” He asked, kneeling beside her, placing the gun safely to the side.

Alia nodded. Now the dogs began clawing at the door, trying to dig their way inside. They weren’t giving up so easily.

“It—wasn’t–bears–Dad–” she said, trying to smile. “But—you should probably—call—the rangers.”

He laughed nervously and squeezed her arm tightly.

“You’re a good girl, Alia,” He rushed to the phone, leaving Alia on the floor to recuperate.

“Hello, I’d like to report a… um, a bear attack,” she heard her father’s voice say.

Thank God. Who’d believe that huskies are trying to kill us?

It was then that she heard the thumping at the window. Alia’s eyes flew open, and there they were: Furry masses hurling themselves at the window, trying to break in.

“DAD!” Alia screamed. There had to be at least five hundred pounds of dog colliding with the glass. Thud. Thud. Thud.

“Dad, they’re at the windows!” Alia sat up, still panting, and reached for the gun.

As the spider cracks spread across the window, Alia snatched up the gun and took aim.

She’d made it this far, the monsters weren’t going to take them down now.

As the glass sprayed across the living room, Alia began unloading shots. Fur and blood flew, and she couldn’t tell where one dog started and the other ended.

All she could do now was hope. 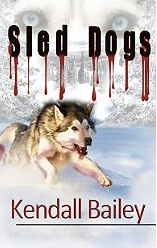 To read more by Kendall, you can:

And don’t forget to purchase your own copy of Sled Dogs here!