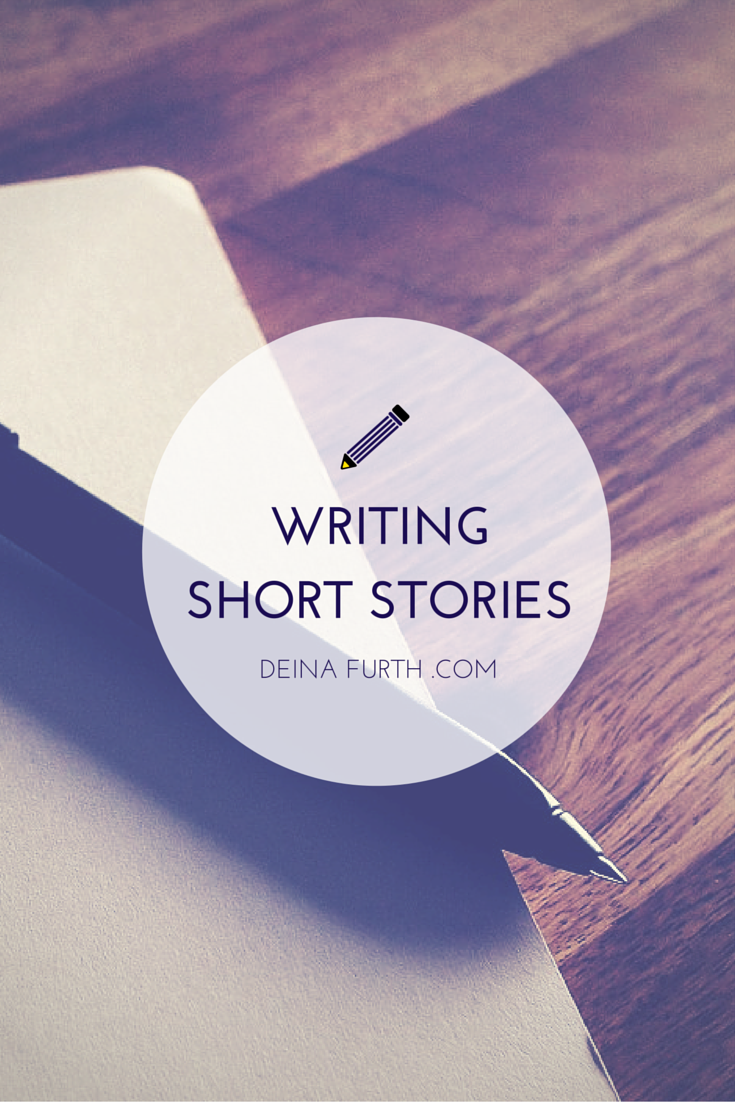 A great example of how powerful a short story can be. There’s a debate on whether or not this flash fiction is actually attributable to Hemingway, but the point still stands.

Wow, it’s been awhile since I’ve updated my blog… I guess, as some of you know, I’ve been busy writing short stories and putting final edits on my novelette, The Magnum Opus (you can read an excerpt here!). Not that that is much of an excuse, but like most other writers, I enjoy working on more personal creative endeavors than blogging…

Anyway, in light of the work I’ve been doing, I figured I’d put together a little post on the process I use. Writing short stories is different than writing a longer, more ambitious piece of work–such as a novel–and for some people, it can prove to be a challenge. In my case, I find it difficult to pare down the work to be concise. I tend to add too many scenes or focus too much on minor details because as a writer, I’m trained to “show, not tell”. We all are, right? I also get hung up on how quickly I should reveal character details. Too soon, and there’s no mystery. Too late, and it feels all shoved in at the end!

So in this post, I’ll go through my three stages of writing short stories: Plotting, Drafting, and Editing/Polishing. I hope you enjoy it!

Let’s come up with a simple example to use throughout this post. Because I’m a big steampunk fan, we’ll go with that genre. Let’s say we want to write a short story about a carriage driver–Orville–who witnesses a murder. He enjoys his job driving around the man and lady of a nearby manor, but he has developed an unshakable crush on the woman. Wanting to avoid heartbreak and awkward confrontation, he’s about to tell the couple that he must accept another job–right after tonight’s shift is over. But luck isn’t on his side. Orville ends up witnessing a murder…

That is the first step–the plot synopsis. It’s helpful to come up with a short (and I mean like, possibly a paragraph) description to help you realize your goals. Define your character, introduce your character’s problem, and set up the scene for the resolution.

Next, delve a bit more into your characters. Take a look at Orville, for example. He’s a carriage driver. He may be sick of being treated like a servant and is plotting a murder himself. Maybe he sees himself as a very important cog in the machine of society and would do anything to protect his position. Or perhaps he has a secret life no one knows about and has accidentally triggered a series of events leading to the murder.

Consider Orville’s habits. When he goes home at night, does he go home to a family? Does he live alone? Is he a bit creepy, a well-meaning and bumbling fellow, or perhaps a grumpy curmudgeon? There are so many ways you can build your character that it can feel overwhelming. Choose a few things to focus on and make sure you keep it in mind when constructing his or her world.

This is often the most difficult part for any writer. World-building is hard work, especially when writing stories that take place in other times or on other planets. A tendency many sci-fi writers have is to info dump on their readers. Don’t do that. In fact, read my post on avoiding this horrific thing I call the “share-a-mony.” Here is my suggestion for handling world building in a short story:

In the first 500-1000 words, you should have your character introduced and have him or her placed firmly in their world. This does not mean that you need to tell us where your character was born, what color his or her eyes are, what he or she is wearing, and the history of the city they inhabit in one paragraph. These details are important, but you can sprinkle them in over time. Think about it in baking terms: sprinkle in spices slowly as you stir to avoid clumping. Yeah, it’s kind of a lame comparison, but it works. These plot details, when added slowly, enhance the “flavor” of the story, whereas clumped up spices (or info dumps) just burn your tongue and leave a bad taste in your mouth.

So for our story, we’ll reveal that Orville is a tall, lanky man with a charming smile and a good heart over the course of a few hundred words. We’ll talk about his backstory and how he feels about the woman, and how he needs to work up the courage to leave the job and say goodbye to her forever.

But we all know that poor Orville is not getting what he wants, right? So now let’s figure out where to go from here.

Yep. I’m one of those people. Most writers know what the curve of a story is supposed to look like, but I think this picture is helpful because it has spaces for you to write your characters’ names, as well as the scene and major plot points. Plus the actual line keeps you focused on when you should be reaching certain milestones.

You can even write your name and grade in the upper left-hand corner. Put a gold star on it when you’re done and celebrate with an adult beverage. Now you have everything mapped out and you can begin on the first draft! 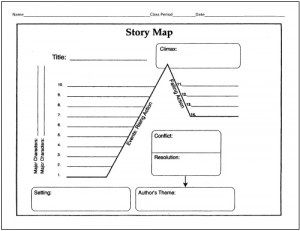 So for our short story, the rising action is that Orville was about to quit his job, but before he can, he has to drive his employers to one more destination. The man asks to be dropped off at a dark bar, and a scuffle breaks out. Punches are thrown, daggers are drawn, and a few gunshots end the brawl, resulting in a couple of dead bodies, including the man Orville was driving.

Now the lady is beside herself, reeling from the sudden death of her husband. She begs Orville to go to the police, but one of the brawlers comes running for the carriage with his gun drawn. This is the climax, when Orville must make his big decision.

What happens next will push the story to the falling action, which in turn leads to the resolution. I’m not sure what happens to Orville. Maybe you can clue me in 🙂 After he makes his decision (whether it’s running away, trying to fight the man, or using the lady as a shield from the rain of bullets), this directly affects his fate. The end of the story will be wrapping up all of the consequences of his decision.

Step 2: Write Your Ass Off

That sounds simpler than it is, and I know it. But the most important part of writing is… writing. No matter what you think of your first draft, you can always go back and edit later. If you still feel a bit uneasy about flying through grammatically-incorrect and awkward sentences, remember what the great Hemingway said:

Writing short stories seems like a simple task, but it takes time and effort, just as any other work of literature. Write your first draft by following your plot map point by point, and you’ll have something solid to work with. If you waffle on details forever, you’ll end up with an intro and nothing else. Push through that desire to get everything perfect the first time around and let the shit fly.

A lot of people get hung up on copy editing right away. The problem with that is… often the plot needs to be edited first. Even with the plot map, the story’s structure tends to take on a life of its own. And that’s okay–you just need to be aware of it so you can figure out what works and what doesn’t. Sometimes you’re going to have to cut or change an entire scene. Other times you might need to switch the order of scenes around.

Once you’re satisfied with the flow of the story, you can move on to editing the grammar. And then you’ll be glad you didn’t take the time to copy edit a scene you just omitted!

Alright, the time has come! You’re happy with Orville’s adventure and you’ve created a compelling short story. The problem is, you’ve made a lot of grammatical errors and you’re not exactly proud of some of the prose. Do a quick read through and change the things that jump out at you–misspellings, punctuation errors, verb confusion, tense errors, etc. For example, I am terrible with tense, so I try really hard to look out for that right away. Also make sure characters’ names and place names are all spelled consistently and correctly. It’s funny how many times I’ve seen people screw up their own characters’ names (common in Sci-Fi where people make up their own languages, etc).

Step 2: Print it Out

Change your font size to 12-point courier, double-space your manuscript, and print that baby out. Sit down and get your red pen handy, because you’ll be going crazy with it. My suggestion is to read it aloud if you can, but if not, the large font should help errors jump out at you. Highlight all errors with your red pen, and write in changes or notes for your second edit.

It’s optional to take a green pen to circle informational passages. This really helps you see how much time you’re spending talking about characters or backstory. In other words, if you’re circling huge paragraphs at a time, you’re probably engaging in a lovely share-a-mony with your reader and will have to change that part.

Now go back to your manuscript and incorporate all those changes. Re-read your story. Doesn’t it sound much tighter and cleaner this time around? It should. Repeat these steps as many times as you like. I personally went through The Magnum Opus about four times over the course of two weeks before my eyes started skipping passages. When you’ve reached that point, it’s no longer helpful to edit your own work. Just set down that manuscript and take a deep breath. You’ve gone as far as you could on your own! Now you have to find a professional editor, or a beta reader, if you do not want to spend money on an editor.

Step 4: Confer with An Editor if Possible

There’s nothing like hiring a real, live, professional editor for your work. Find someone who is well-versed in your genre, whose personality seems agreeable to your tastes, and preferably who has published work out there. If you do not want to spend money on an editor (and I HIGHLY recommend against this, but I do understand budget constraints, particularly with shorter works), then find a few beta readers to give you honest feedback. This means someone who isn’t your mother, your sibling, your partner, or your pet. When you’ve received honest feedback, truly take their points into consideration and revise as needed.

That’s about all I have for now. Good luck with writing short stories, and have fun! 🙂