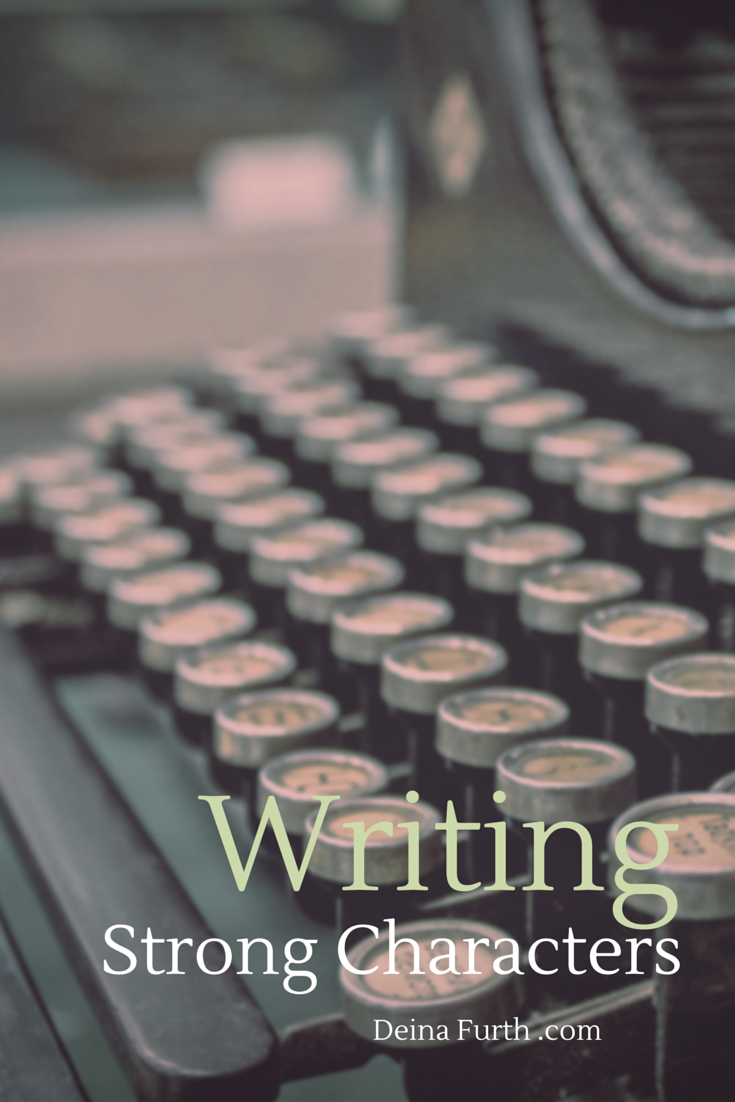 As a follow-up to last week’s post about writing short stories, I was encouraged by a few of my Twitter followers to compose a guide on how to go about writing strong characters. It makes perfect sense–you write a solid story with careful planning, so of course you want strong characters to inhabit the world that you worked so hard to create! So let’s take a look at how to build convincing, strong characters for a story of any length. Be forewarned, I’m going to get a little ranty, and don’t forget that these are just my views and my opinions–you can take them or leave them. 🙂

Why Should You Care About Character Development?

Because almost everyone cares about character development.

As a writer, you hear over and over again that you need to “write strong characters.” To me, this phrase has just become one of those regurgitated soundbites that goes in one ear and out the other. Of course you want to write convincing characters! Do you even know of any writer who proudly shows you his or her manuscript and says, “Don’t you love my two-dimensional characters? I really tried hard to make sure they were as bland as possible!”

Of course you don’t.

Quite possibly the only genre that doesn’t bother with any character building is the straight-up pornographic work; I’ll let that one slide because we all know the reason for that.

But for those of us who want to create masterful character-driven plots full of tension, emotion, and unforgettable people–people who, by the end of the story, the reader feels like they truly know and love–we want to get this character development thing down.

So how do I make sure I’m doing this right?

Honestly, there’s no one way to do this. The best way to ensure you’re writing strong characters is to a) read your genre and b) listen to your fans. I’m a fan of science fiction, and I can tell you that there is a lot of content out there with stiff, unbelievable characters; however, science fiction isn’t alone in that department. I know that is not a particularly innovative statement, but it’s really important that you consider these avenues when writing your characters.

That being said, I certainly have a handful of tips that will make you truly consider the choices you’re making in developing your characters.

I’m going to start with women first, because this is a common question people have when writing.

Another soundbite. Another thing that goes in one ear and out the other. You hear this over and over and OVER again until it’s reached that point of saturation where you just default to calling any and all of your female characters “strong” without stopping to consider what writing strong female characters even means.

First of all, writing strong female characters doesn’t mean that you write a woman who is a ball-buster who secretly–or not so secretly–loves sex. I’ve seen so many people who claim their main female character is “strong” because she takes no shit from men and is proud of her body, and isn’t afraid to use it as a weapon to get what she really needs. She’s independent! She’s sexy! She’s got brains… and no real personality!

She’s basically a man in a dress.

Making a woman “strong” doesn’t mean you make her into a man. I’ve actually heard authors give advice like, “Write a man, but change all of the pronouns to feminine. Boom, you got a strong lady.” That’s terrible advice. In fact, I suggest you replace “strong” with the word “believable” or something along those lines, so you don’t get the idea that you must make a woman exhibit a man’s ideas of what strength *really* is to be a valuable character.

To write a strong (or believable!) female character, you must write a character with real flaws as well as real strengths. Insecurities, hobbies, phobias, education, training, extro- or introversion–all of these things contribute to making a strong character. So how do you make sure she has “real flaws and strengths”?

Simple. Ask yourself this: “Is this flaw actually a strength in disguise?” and “Is this strength a trope?”

Let’s go over an example, starting with strength masquerading as a flaw.

Your protagonist Elle is a little bit too nice. This is supposed to be a flaw because it gets her heart broken a lot and causes her to suffer for the sake of dramatic tension! But I wouldn’t necessarily call it a real flaw, and here’s why:

You know how in a job interview, you disguise a “flaw” as a strength? (I am so attentive to detail that sometimes I take too long to get things done–but I always do things perfectly!) That’s how I see this situation.

But that doesn’t mean that you can’t write Elle to be kindhearted to a fault. You just have to develop it more. You could try something like this:

Elle bears the emotional burden of others because she doesn’t feel valued unless she gives life-changing advice. She gives so much of her energy to others that she neglects her own issues and ultimately alienates herself, despite trying so hard to care for others. People often use her as a shoulder to cry on, but it’s easy to take advantage of her seemingly unending fount of empathy.

Does that constitute being “too nice”? Yes. But it gives Elle a real personality flaw that can be worked into a wonderful story.

I’ll provide an example of “strength as a trope” in the next section.

Writing men can also be a challenge. Though men have been the focus of storytelling for most of history, it’s still easy to write them in an unconvincing way. In this section, I’ll address a few tropes/cliches that I have noticed and provide examples of how you could easily improve your dude with just a little bit of effort.

Trope 1: Chick Magnet. This guy gets all the ladies. They fall all over him. He exists and they flock to him because, well… there he is, the man with all those one-liners and totally hot pecs. I mean, what else do you need? A personality? NOPE. NOT THIS GUY.

This guy is celebrated across genres–think of the “James Bond” type–and of course there’s no need to get rid of a character that people recognize and love. But there is a limit to how long I can watch this guy do nothing interesting (or worse, act like a complete jerk) and yet be rewarded for it. Why doesn’t he ever suffer consequences for his actions? Why doesn’t someone grow a backbone and tell him he’s a selfish jerk? I don’t know. It never seems to happen.

Trope 2: The Can-Do-No-Wrong Guy. This guy is smart. Handsome. Educated. Totally badass. Does he need to learn a new skill to push the plot forward? You bet he’ll learn it without an issue. Does he need to overcome a big obstacle–fight a strong foe, save his lovely lady friend, or sneak into a top-secret location? Yeah, he’ll do it all no problem. He’ll even do something that goes completely against the laws of physics and pull it off because… because… magic. Yes, magic.

This guy is boring. Also, he’s not even remotely realistic. He’ll be rewarded for everything he does, and he’s really learned nothing, despite giving the appearance of having truly struggled and grown as a man.

Let’s go over a quick example:

Jack is a renegade police officer. He’s about to track down the druglord he’s been hunting for what seems like eons, and along the way, he’s lost his family…and perhaps his sanity. He tends to go against the book, and yet everything seems to work out in his favor. No matter how many laws Jack breaks, everything’s A-OK because he’s going to avenge the death of his family, who really only existed in the first place to make him seem relatable and therefore tragic. Cool.

Jack has far too many strengths. He needs to have consequences for his actions, and he must have more than just a tragic back story. He has to get the crap kicked out of him and will definitely need to suffer through some serious self-doubt. No one is perfect, not even a renegade, druglord-hunting police officer who is out to avenge the death of his perfect family. Also, he will need the help of allies–Jack absolutely cannot do all this on his own.

In fact, every character will need help at some point. If your character can slaughter all the baddies and solve crimes on his own, you’d better be writing a parody.

Writing Strong Characters Should be Fun.

Think of the people you know and love (or hate!) in your life. What are their strengths? Where do you think they struggle? Whether you’re writing a good or bad character, there should be both strengths and flaws. There should be both good and bad–no one is purely good or evil. Writing strong characters is like getting to know good friends. Once you have their personalities planned out, they begin to take on a life of their own in your works.

For more tips, or to ask me questions, follow me on Twitter! I post something inspirational about writing and editing every day, and I’m happy to try to give you advice if you seek it.